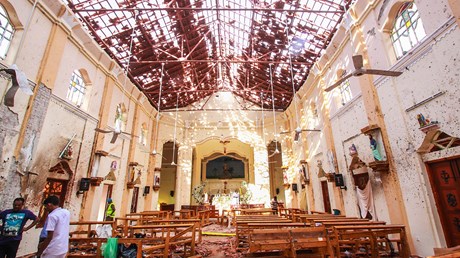 The joy of Easter quickly turned into terror and grief for Christians in Sri Lanka this morning, where bombers conducted coordinated attacks on at least three churches and three high-end hotels, killing more than 200 people.

The government has urged citizens to resist speculating whether radicalized Muslims are to blame for the violence, which mostly took place in or around the capital city of Colombo. Experts say if the bombings end up being religiously motivated, they represent the bloodiest sectarian attacks in decades in Sri Lanka, where civil war ended in 2009.

At Zion Church, rows of Easter lilies remained in front of a sanctuary as victims fled the blast, leaving behind hymnals, Bibles, and debris across the floor. Initial reports indicated that 25 worshipers had been killed and another 27 injured at Zion—according to its website, a charismatic church that belongs to the Fellowship of Free Churches of Sri Lanka, located on the opposite side of the island in Batticaloa.

Other attacks took place at two Catholic churches, St. Anthony’s Shrine in Colombo and St. Sebastian’s Church in Negombo, and three hotels in Colombo, all around 8:45 a.m. local time.

St. Sebastian posted a brief plea on Facebook inviting the community to “come and help” after the bombing, along with photos of rows of disheveled pews covered in roof tiles, its ceiling blown out, and blood splattered on the walls.

“In three decades of war, this scale of attack has never happened,” said Meenakshi Ganguly, the South Asia director at Human Rights Watch, in The New York Times. “In terms of serious, religion-based violence, we haven’t really seen that.”

The government has arrested seven people in connection ...