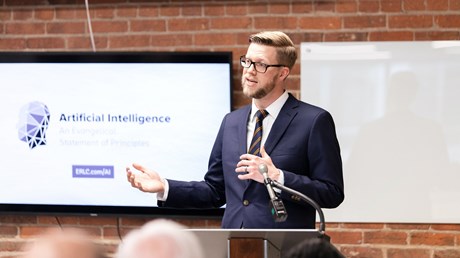 With a landmark statement on AI—the most prominent consideration of the issue among American evangelicals—these leaders are putting moral and ethical concerns at the forefront as the emergent technology grows behind the scenes.

“We recognize that AI will allow us to achieve unprecedented possibilities, while acknowledging the potential risks posed by AI if used without wisdom and care,” state the authors of the new Evangelical Statement of Principles on Artificial Intelligence, unveiled today in Washington, DC. “We desire to equip the church to proactively engage the field of AI, rather than responding to these issues after they have already affected our communities.”

Experts in faith and AI have applauded their proactive efforts to address this area, calling it “a pioneering move” for the church, as secular and government spheres have recently struggled to confront technology’s ethical issues.

“We need a common starting point on which to evaluate the weighty ethical decisions before us about how this technology will be develop and used,” said Jason Thacker, ERLC’s creative ...