The Baptist leader, convicted for his role in the Occupy Central and Umbrella Movement protests, takes the stand with a biblical defense for human rights. 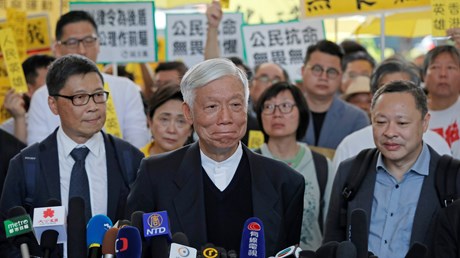 A Baptist pastor in Hong Kong turned the stands of a Hong Kong courtroom into his pulpit, quoting Scripture and calling for justice in the name of God, after he and eight other activists were convicted Tuesday for crimes related to their involvement with pro-democracy Occupy Central and Umbrella Movement protests.

Chu Yiu-ming, leader of Chai Wan Baptist Church, recounted his testimony of finding hope in Christ after a bleak childhood and defended his calling as a minister to fight for human rights, dignity, and care for all people.

“We have no regrets. We hold no grudges, no anger, no grievances. We do not give up,” he said, speaking on behalf of fellow activists involved in a campaign to bring universal voting rights to Hong Kong. “In the words of Jesus, ‘Happy are those who are persecuted because they do what God requires; The Kingdom of heaven belongs to them!’ (Matthew 5:10)”

An English translation of Chu’s remarks to the court was printed in full in the Hong Kong Free Press.

In 2013, Chu, along with scholars Benny Tai and Chan Kin-man, launched Occupy Central with Love and Peace, a movement that led to the widespread Umbrella Protests the following year. Though committed to nonviolent civil disobedience, the Hong Kong judge found them guilty of “conspiracy to commit public nuisance,” as they campaigned and demonstrated for universal voting rights.

Since the territory is a special administrative region of China, it’s afforded more freedom and autonomy in than the mainland, but Hong Kong does not elect its government leaders directly, and Christian leaders and activists worry about encroaching Communist control. The 75-year-old pastor told the courtroom in Cantonese: ...