The Rise of Conversational Churches

Why a growing number of congregations are taking deliberate steps to relearn the habit of talking together. 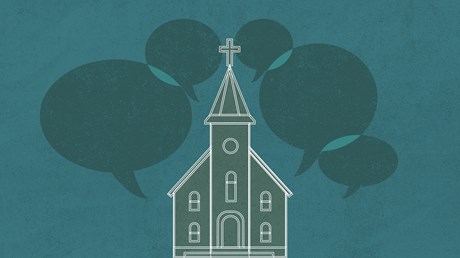 In this age of social media, it is widely accepted that we don’t know how to talk together—and especially with those whose perspective differs greatly from our own. From Washington, DC, where the federal government teeters on the brink of shutdown every time a new budget must be passed, down to the smallest social gatherings, society in the 21st century is marked by an inability to talk about complex and divisive questions. And our struggles to converse go far beyond political and ideological divides. Economic, racial, generational, educational, and gender divides also play a role. And of course, social media technologies that give preference to brevity and consensus only amplify this problem. Amid these widespread failures of conversation, some churches across North America are devoting themselves to learning the practice of conversation, among their members and with their neighbors.

Although this budding movement of conversational churches goes against the flow of contemporary society, it follows in the footsteps of a long Christian tradition of conversation. The Gospel accounts of Jesus himself, for instance, portray him as one who didn’t shy away from difficult conversations with the Pharisees or others who might have been construed as enemies, including tax collectors, lepers, Samaritans, and others on the margins of first-century Jewish culture.